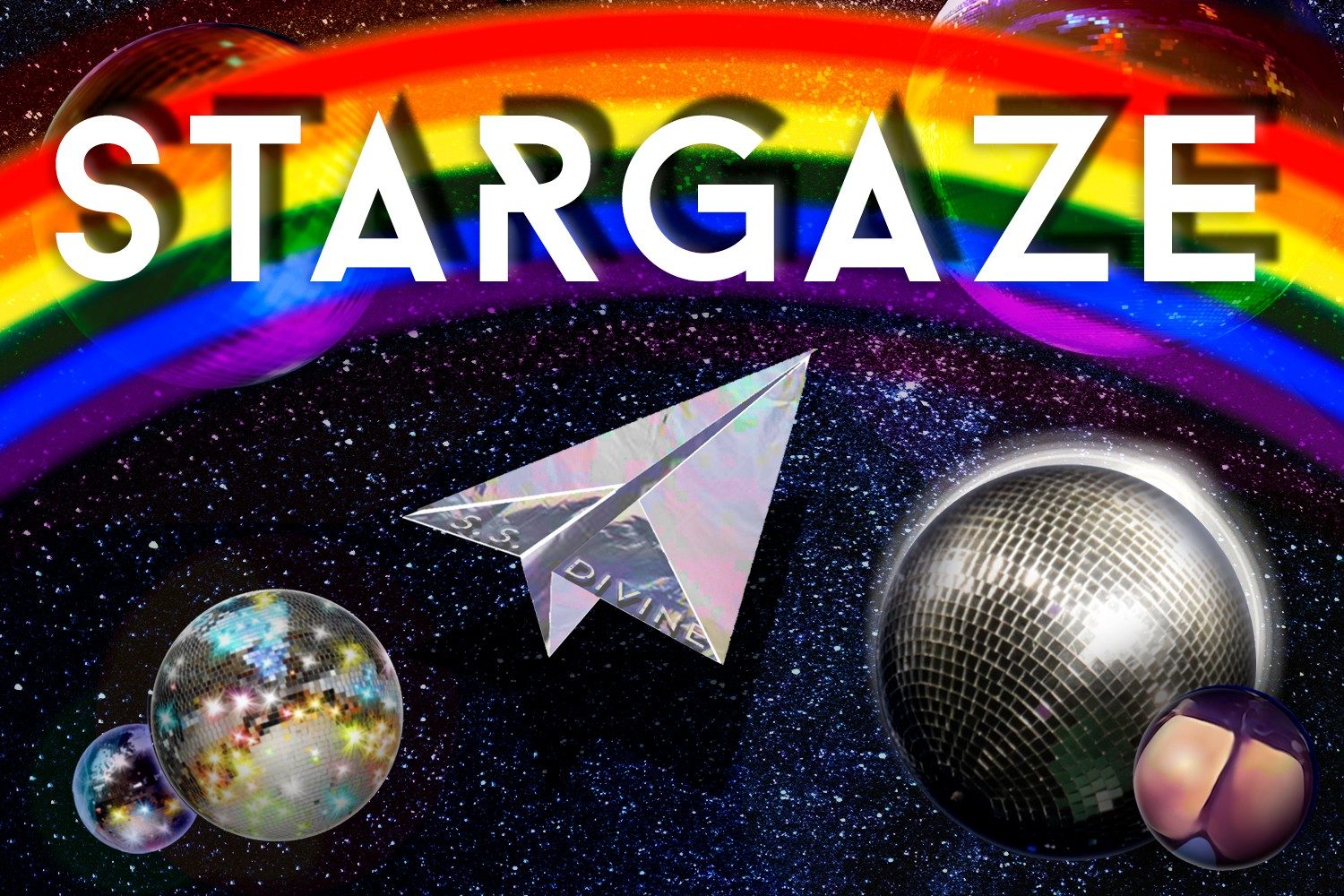 Independent production company Borken Creative is thrilled to announce that it has been awarded Concept Definition funding from Ontario Creates. This grant will allow Borken Creative to produce the pilot episode for STARGAZE, a campy queer sci-fi comedy shortform series.

STARGAZE follows the adventures of two begrudging ‘elderqueers’ who are forced to chaperone a ragtag group of bickering queer youths on their hero’s journey as they travel the far-flung regions of space in search of the ‘Unity Crystal,’ a legendary weapon that will aid in the struggle against the cosmic forces of oppression and conformity.

The dreamchild of Canadian transmedia pioneer Carrie Cutforth, STARGAZE was conceived as a love letter to the LGBTQIA+ communities. “It might be news to hear but a lot of us queers don’t get along. Shocking, I know!” she comments. “After witnessing one Twitter queer flamewar too many, I became seized with the idea of launching all of our queer infighting into space. This was the kernel of the idea for what would become STARGAZE.” The show will examine our communities’ foibles and tensions through a satirical lens but with plenty of love and camp. Think THE FACTS OF LIFE meets John Waters’s POLYESTER in space.

TV veteran writer and digital series pioneer Jill Golick (creator of the award winning series RUBY SKYE P.I.) has come on board to co-showrun the potential series. She comments “I am beyond thrilled to support Carrie in bringing her hilarious, inclusive sci-fi epic to life and grateful to Ontario Creates for supporting this truly original project.”

Rounding out the team: Regan Latimer, creator of one of Canada’s first lesbian web series, BJ FLETCHER: PRIVATE EYE, has been enlisted to direct and edit the pilot episode. Nyree MacPherson, who is deeply embedded in Toronto’s queer theatrical performance sector, will come on board as Production Supervisor. Storyteller and Comedy Performer Erin Rodgers joins the team as a writer for the development package. Dean Dorval, Borken Creative’s Vice President and Director of Content & Branding, will be heading up the content marketing and digital strategy for STARGAZE.

Borken Creative’s productions are driven by emotionally powerful storytelling from a diverse chorus of voices. Stories that can be raunchy, loud, sad, queer, neurodiverse, etc.—with an emphasis on authentic narratives created and written by members of traditionally underrepresented communities.

STARGAZE will be Borken Creative’s flagship production while several other original screen content productions are in development.

The pilot episode for STARGAZE is slated to shoot the summer of 2021.

The production of the pilot episode of STARGAZE is made possible with the support of Ontario Creates. Borken Creative and the entire STARGAZE team is incredibly grateful for Ontario Creates’ support.

Independent creative producer & writer Carrie Cutforth creates fun shit across multiple platforms: content for screens, interactive storytelling, live events, and more. Since 2010, Carrie has been on the forefront of cutting-edge interactive storytelling: she created and produced rare collectibles – including a deck of retro TV trading cards—for her transmedia project SPY SLUTZ (2015); co-created and co-authored ALL YOUR FATES (2012)—the first serialized novella to be showrun like a TV series (with now over a million reads on Wattpad); and wrote the novella [DEL]’S DIARY (2011) as part of Immersive Fiction’s VEIL NANOSCIENCE alternate reality game.  Carrie is currently producing the documentary BULLETPROOF: A LESBIAN’S GUIDE TO SURIVING THE PLOT.

Jill Golick is well-known in Canada’s media industry as a writer, producer, digital storyteller and teacher. She has written for children’s (SESAME STREET, ANDROIDS), drama (BLUE MURDER), soap (METROPIA) and interactive. She’s best known for the internationally-acclaimed digital detective series RUBY SKYE P.I. which she created, financed, wrote, produced and distributed. Her work has been rewarded with two Writers Guild of Canada Screenwriting Awards, a Canadian Screen Award, a Youth Media Award of Excellence, a Banff Rockie, and the grand prize from the LA-Marseilles WebFest, to name just a few. From 2010-2018, Jill served as the president of the Writers Guild of Canada. She co-authored WIV’s On Screen Report 2019, which documents the participation of women in key creative roles in Canada’s publicly-funded film and television production. She recently wrote the Pandemic Pilot Program, a step-by-step guide to writing your original TV series while practicing social distancing, which is available as a free download from jillgolick.com. Story + Audience, Jill continues to practice the craft of screenwriting and is currently developing new TV series for both adult and children’s audiences.

Regan Latimer is Executive Producer and Creative Director at Bee Charmer Productions, a Toronto-based production company she established in 2006. Skilled across both creative and technical disciplines, and with over 11 years of experience directing, writing, editing and producing projects, Regan’s credits include editing Emmy award-winning promo spots for COLORADO’S ROCKY MOUNTAIN PBS as well as commercial and promotional video work for brands such as Hershey Canada, Toyota, and Luminato. Regan is the writer, director and producer of the popular lesbian web series, B.J. FLETCHER: PRIVATE EYE—a series that garnered over 12.5 million views, and one of the first indie series to secure distribution on a major platform, running three seasons (2008-2012) on the Logo Network/MTV. As a filmmaker, Regan’s second short, LINDY CALLS TRACY (2016), debuted at Toronto’s Inside Out Film Fest, and went on to screen at festivals worldwide, including Australia, Canada, India, and Russia. Regan’s first short film, HARMONY LOVE MATCHES FOR LIFE INC. (2008), was award-nominated at the 2008 Great Lakes International Film Festival. Production on her new feature length documentary, A LESBIAN’S GUIDE TO SURVIVING THE PLOT—exploring queer representation in television—is slated to be complete this year.

Erin Rodgers is a storyteller, writer and workshop facilitator.  She is the proud creator of storytelling shows STORYSTAR and AWKWARD. AWKWARD was featured in Torontoist, The Varsity and Macleans Magazine, and was declared one of Toronto’s top monthly comedy shows by Splitsider Magazine. As a comedy performer and storyteller Erin has performed across Canada and in the US.  In the summer of 2017, she performed her one-person storytelling show TOUGH in The Toronto Storytelling Festival and the Winnipeg Fringe.  She has written and performed original comedy material in festivals across Canada and her comedy shorts have been featured on Cracked.com and at the National Film Board of Canada.

Dean brings over ten years of online marketing experience to Borken Creative, along with several years of experience working creatively as both a content writer and content strategist in a marketing agency setting. During that time he’s kept abreast of the constantly-changing marketing landscape, and has put those skills to work by helping clients produce storytelling-driven and SEO-optimized written website content designed to attract and engage audiences.

Nyree MacPherson is a multidisciplinary artist and producer with a specialization in the Cabaret Arts. She has been producing and hosting drag & burlesque shows and creative permutations within the art form since 2013. Credits include DEM BROADS, SHOWDOWN (a cabaret game show), and a variety of independent productions featuring music, burlesque, drag, comedy, circus, dance, and more. A seasoned singer, Nyree has spent the last fifteen years working in a variety of performing art disciplines and has trained and judged for the CANADIAN IMPROV GAMES. Nyree has also studied around the world in vernacular and social swing dances and has hosted International Lindy Hop competitions both in Canada and at the famed New York City 92nd Street YMCA. She has worked extensively as an operations consultant, producer, and an event planner in corporate, not profit, and arts settings.